Learn about irritability during menopause and how Macafem can help.

The menopause transition can be unpredictable and stressful, often leading to irritability. These mood changes have the potential to impact both personal and professional relationships.

Irritability is one facet of mood swings that some women may experience more strongly than sadness or elation. A woman may lose her patience more quickly or have a stronger, more heated reaction than the situation calls for. Because of these disproportionate reactions, a woman may feel unlike her normal self.

Irritability is just one form of mood change that can occur during the menopause transition. It’s important to separate irritability from more serious mood disorders, which are less common but still possible during menopause.

Irritability, like other changes in mood during menopause, arise because of shifts in hormone levels. Estrogen in particular plays a role in regulating serotonin, one of the main neurotransmitters in the brain that regulate mood. Estrogen levels fluctuate up and down as the body prepares to stop menstruation, which impacts serotonin levels and can result in mood irregularities.

Other symptoms of menopause, like hot flashes and sleep problems, can also generate stress and irritable feelings. These menopause symptoms also originate from hormonal imbalance.

Underlying hormonal fluctuations during menopause can make a woman more likely to experience changes in mood like irritability, especially in the presence of certain triggers. Common triggers include:

Women in poor overall health and those with a history of depression or anxiety are also more likely to experience mood disruptions during menopause.

Macafem is an herbal supplement that balances hormone levels naturally. It accomplishes this by providing essential micronutrients and unique alkaloids to the hormonal glands, supporting the body’s own production of hormones at balanced levels. When estrogen is secreted at adequate levels, serotonin production is properly regulated, helping to balance mood. Macafem’s hormone-balancing mechanism also helps relieve the other symptoms of menopause that contribute to irritability.

Learn more about how Macafem works.

1. Is irritability related to PMS?

In a way, yes. Symptoms of premenstrual syndrome (PMS) are also triggered by hormonal fluctuations, though those fluctuations during the menstrual cycle tend to be lesser than those of perimenopause.

2. When do women start perimenopause?

Though it is highly variable, women usually enter perimenopause – the phase leading up to a woman’s last period – in their mid to late forties or early fifties. However, it is possible for women to start perimenopause earlier, especially if they have had a hysterectomy.

3. What are some good ways to reduce stress and irritability?

There are several activities than can help reduce irritability by lowering stress levels. Regular exercise is important, and this can be in the form of yoga, for example, which can help induce feelings of tranquility. Likewise, meditation can also help. Rhythmic breathing can aid in diffusing irritability in the heat of the moment.

4. How should Macafem be taken to relieve irritability?

The general recommendation is three tablets of Macafem taken in the morning with breakfast. This can be adjusted depending on the body’s response to the supplement, from as few as one tablet per day up to six. If irritability does not get better within 30 days, the standard dosage can be doubled to six tablets daily, three with breakfast and three with lunch.

The various symptoms of menopause are all connected to imbalances in estrogen, progesterone, testosterone, and other hormones. Because it balances hormone levels, Macafem can help relieve the following symptoms: 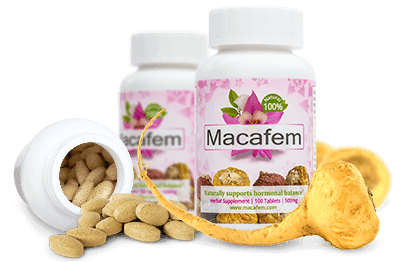